President Obama signed a secret order in recent weeks authorizing a more expansive mission for the military in Afghanistan in 2015 than originally planned, a move that ensures American troops will have a direct role in fighting in the war-ravaged country for at least another year.

Mr. Obama’s order allows American forces to carry out missions against the Taliban and other militant groups threatening American troops or the Afghan government, a broader mission than the president described to the public earlier this year, according to several administration, military and congressional officials with knowledge of the decision. The new authorization also allows American jets, bombers and drones to support Afghan troops on combat missions.

It’s especially relevant that the order was signed in secret, because the decision directly contradicts Obama’s 2012 campaign rhetoric about withdrawing U.S. troops from Afghanistan by the end of 2014 — in fact, Obama specifically made it a campaign issue that he promised to withdraw troops by this year’s end, whereas Mitt Romney had no timetable.

On Twitter, journalist Gregory Johnson noted another, implicit reason for the story’s importance: “Unmentioned, but I assume this also allows Guantanamo to stay open another year,” with Harvard Law Professor Jack Goldsmith explaining, “It precludes Taliban detainees from arguing ‘end of hostilities’ as a basis for release for another year.”

The next morning, however, I noticed the print edition carried the much different headline, “IN A SHIFT, OBAMA EXTENDS U.S. ROLE IN AFGHAN COMBAT.” 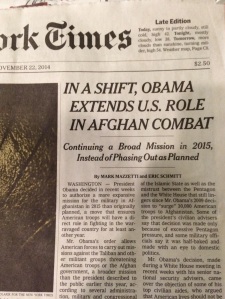 But as seen on News Diffs, which tracks changes made by major publications, the Times changed the piece online, including lowercasing the headline, several times before that, on Friday night — first changing “secret” to “classified,” and then changing “signed a classified order” to “decided.”

When asked on Twitter to explain the changes, Mazzetti said (in two tweets), “after story posted we continued reporting, and became less certain Obama actually “signed” something so we reverted to language we knew absolutely to be true.”

I wouldn’t ask Mazzetti to put his sources at risk, but this response is lacking in that it doesn’t address the question of whether the decision was made “in secret.” Note the web article’s URL still says “in-secret.” Perhaps the differences in “in a shift” and “in secret” aren’t vast, but the Times certainly thought them important enough to change the headline — why? And the story continues to refer to “Obama’s order,” so signed or not, a decision was made — why was the information first that it was carried out by way of a classified order?

Speaking to CNN, US officials won’t confirm the Times‘ report but are happy to speak to the value of the US troop presence in Afghanistan.

Having been scooped, Reuters sought its own comment, and reported the following:

President Barack Obama has approved plans to give U.S. military commanders a wider role to fight the Taliban alongside Afghan forces after the current mission ends next month, a senior administration official said.

The decision was merely “approved” and poof, like that, the classified order is nowhere to be seen.

3 thoughts on “The disappearing classified order”