Last week, I applied for press credentials to cover Bradley Manning’s pre-trial hearing in Fort Meade, Maryland. I’m an intern for the Bradley Manning Support Network, but because I intended to write about it for this site and potentially elsewhere, I applied as an “independent journalist” not affiliated with any particular organization, a news team of one.

On Wednesday, December 14, at 3:35 PM, Fort Meade’s Media Desk sent me this email, entitled “Credential Email – U.S. vs. Pfc. Bradley E. Manning (UNCLASSIFIED).” In the first section, the second sentence reads, “You are now officially credentialed to cover this hearing.” 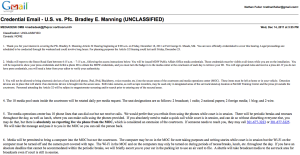 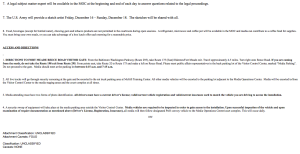 Then, 13 minutes later, the same Fort Meade Media Desk sent me this email, rescinding the aforementioned credentials with no explanation except that they were sent out “in error.”

It’s very possible that the email was sent out by mistake. When I sent another email asking for comment on the revoking of the initial response, they sent this reply:

Perhaps the key phrase there is “provided valid press affiliation”: I applied independently, and so maybe the military doesn’t grant media access to unaffiliated journalists. It’s also worth remarking on the “limited seating” claim. It’s true that the first day of the hearing, journalists and the public packed the courtroom and there were certainly reporters left out. But in the latter half of the hearing, attendance was sparse. I was granted access to the courtroom then without much trouble, yet sill was not allowed in the “media operations center,” where reporters had a list of the witnesses and could compare quickly scribbled notes to corroborate.

As EFF writer Rainey Reitman writes in The Nation, the military spokesperson at Ft. Meade was not willing to shed much light on the matter:

When Nathan Fuller applied for a press pass to attend the hearing and take notes from the media center, his request was granted—and then rescinded. Among other things, Fuller is an intern with the Bradley Manning Support Network, a coalition of individuals and organizations working to cover the financial costs of Manning’s defense and educate the public about the issues involved. On Monday, I asked the Public Affairs Official at the hearing what criteria was used to assess whether someone qualified as a journalist for the purposes of receiving a press pass, and he said he did not know. I asked how many other individuals had been denied press passes to the hearing, and he again replied that he didn’t know. I asked how many other individuals had received press passes only to have them rescinded and got the same non-response. He didn’t know if there was a phone number to someone who would have the answers to these questions. I asked my questions again on Tuesday, and the Public Affairs Officer still knew nothing—except that he wouldn’t have an answer for my questions that day.

(I delayed publishing the first email because Reitman told me after her conversation with the PAO that she expected he’d look into it and possibly award me new credentials for the remaining days.)

So the claim that the credentials were awarded in error remains plausible. But in the context of a wider crackdown on media covering the case, and without further explanation, it remains suspicious.

The credential retraction fits into a longer narrative of the United States military, Manning’s prosecutors, abusing their power to minimize media coverage of the hearing. I strongly encourage reading the rest of Reitman’s piece, entitled, “Government Blocks Access to Manning Hearing,” for more on these efforts. She writes further on the military closing portions of the hearing containing classified information:

On the third day of the trial, the investigating officer decided to accommodate the prosecution’s request for a closed hearing for a portion of the next day. The investigating officer found that the information had been properly classified and that the need to maintain that classification outweighed the value of a public and open trial. But the public, who has had access to the WikiLeaks releases for well over a year, was not given an opportunity to object. The only one who did object was the defense team of Bradley Manning, to no avail.

The Bradley Manning Support Network issued a response, condemning the closed hearings, in which they note: “even members of the public who hold relevant security clearances are expected to be removed from viewing the proceedings.”

I’ll add just one other element that she didn’t include in the article: When Manning was initially detained in Kuwait, the military told his lawyer, David Coombs, to prepare for an immediate hearing. Coombs objected – he hadn’t even met his client yet – and requested a delay to gather his defense. So the military used that request to delay the trial as long as they wanted. They pushed the hearing back a staggering 18 months, providing ample time to solitarily confine Manning to wear him down, allow media coverage of the WikiLeaks saga to die down, and finally to schedule the hearing just before the holidays (and on a weekend), so that as few journalists and Manning supporters as possible would be able to attend. (Manning’s lawyer motioned to dismiss for lack of a speedy trial.)  It should be abundantly clear to those formerly suspicious that the military has been working overtime to keep this hearing as secret as is legally allowed – and then some.

One thought on “On Media Access to Bradley Manning’s Hearing”